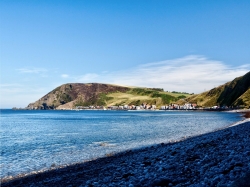 On a beautiful Sunny day in late July 2020, I decided to make a short excursion up the Moray Coast to visit Banff, Gardenstown and Crovie.

Banff is a historic town, dating back to the 12th Century and is situated in Banff Bay, at the mouth of the River Deveron opposite Macduff. A former royal burgh, it is very well preserved with a number of outstanding buildings, and is the county town of historic Banffshire.

Due to its location at the estuary of the River Deveron, having a reliable crossing of the unpredictable river proved problematic with a number of unsuccessful attempts to build a crossing until 1779 when a seven arched bridge built by civic engineer John Smeaton , improved access to both Banff and Macduff, and the building of the turnpike road in 1800 further improved connections.

In the 15th Century, along with Aberdeen and Montrose, it was a popular exporter of Salmon to Europe and in the 19th Century huge quantities of herrings were produced and exported to the Continent. Nowadays the commercial port has been refurbished and is a Marina for a small number of fishing boats and leisure craft.

Among the number of attractions you can visit is Duff House, which was designed by the renowned architect William Adam in 1730, and is one of Scotland's outstanding classical houses , it is also used by the National Gallery of Scotland for Art Exhibitions. You can also visit the Wrack Woods which contains a mausoleum, ice house and a picturesque walk to the Bridge of Alvah which crosses the River Deveron.

Other things you can see in Banff include Banff Castle, a Georgian town house, built on the ruins of the original castle. The Tolbooth, which administered justice as the courthouse and prison and a pre Reformation Market Cross. The Banff Museum which was donated by Andrew Carnegie has a collection of Silver and interesting artifacts on display.

I managed to get images of the Tolbooth, Marina, Banff Castle, War Memorial, the refurbished Merchants House, Harvest Trinity Centre, Market Cross and a number of Panoramic images, before visiting my next destination, Gardenstown.

Gardenstown is a small coastal village, located in the Gamrie Bay, and was established in the 18th century, as a fishing village. It was part of the Banff Fishery District, and was involved in the Herring Trade during the 19th Century. Over a number of years the village has expanded from the original Seatown to a larger community.

It has a number of services including a harbour, osteopathy clinic, public house, heritage centre and a meteorological station. The Village is served by Gardenstown New Church, but there is also St Johns Church established in the 16th Century and built to celebrate the defeat of the Danes. The Church ruins and the graveyard are in a superb location with great views across Gardenstown, Crovie and Troup Head, but the climb up is not for the fainthearted.

In Gardenstown I captured images of the Harbour, Heritage Centre, New Church, Seatown Cottages, St John's Church and views of the Gamrie Bay.

Crovie, our last port of call started out when a number of crofters were evicted and set up a small settlement in 1791 to earn their living from the sea, and over a number of years despite the hardships the community had expanded and it had started to thrive, but all of that was brought to a sudden end with the Great Storm of 1953, when a number of houses were destroyed by massive waves and many people fled. But thankfully the remaining residents set up the Crovie Preservation Society to renew the village and stop its demolition. To this very day it is a charming totally unique scenic village and well worth a visit.

Crovie images that I recorded included the Harbour Pier, Coastal Path, Beach, Fisherman Cottages and a number of Seascape and Panoramic Views.