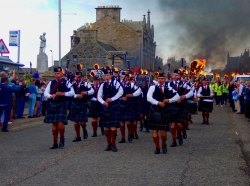 In 2019 I was commissioned by a local regional magazine to cover a number of Public Events. The three Events were the Scottish Traditional Boat Festival in Portsoy, Aberdeenshire Friday June 21st-Sunday 23rd, the Aberlour and Strathspey Highland Games in Aberlour on Saturday 3rd August and The Grantown Show, Grantown on Spey on Thursday 8th August.

The Scottish Traditional Boat Festival is a annual event that takes place in the charming fishing village of Portsoy, it is a hugely popular Festival and attracts visitors from all round the world who come to see the cultural highlights, food & drink, musical entertainment, arts and crafts and seafaring boats of all sizes battling in competition watched by enthusiasticcrowds gathered by the harbourside who watched on with eager anticipation. This year we also had the Vikings of the Up Helly Aa Jarl Squad in all their regalia coming to visit, and the spectacular torch lit procession was not to be missed.

The Sights, Sounds and Scents of the Festival were all around you, whether it was naturally cooked meats and seafood's and other fine nourishments, mingled with the many tunes coming from talented musicians, or the skilled craftsmen and women, with traditional skills, creating wonderful goods of genuine charm.

Over the three days the number of pictures I took was very satisfying, and the variety of subjects was outstanding, and I look forward to attending the Festival again in the future.

The 76th Aberlour & Strathspey Highland Games took place in the beautiful Alice Littler Memorial Park adjacent to the River Spey. The wonderful sunny weather , brought locals and visitors alike to watch a varied programme of track and field events, starting with the highland dancers and the running events. Then came the field events including the hammer throwing, shot put, high jump and the caber tossing.

The massed pipes and drums provided musical entertainment through the course of the afternoon, there was also junior piping and drumming events for younger members of the bands to shine and right at the end of the day's festivities there was a invitational tug of war, before the final march of the bands marching through the village brought the activities to a close. The main sponsors of the Games were Macallan Distillery, Walkers Shortbread and Robertsons.

I was able to take many great images, and the access I was able to have to any part of the Games really did help.

The Grantown Show took place at the Heathfield Park, Grantown on Spey. The show was well supported despite the changeable weather, with visitors from near and far enjoying the many attractions on display.

The morning events had the judging of livestock competitions for Cattle, Sheep and Horses. The Domestic competition which had arts and crafts, preserves, home bakes, dairy produce and flower displays was also adjudicated, as was the Clydesdale Horses . After the President's Speech the afternoon events took over these included the Champion of Champions, Grand Parade of Livestock, Galcantry Clydesdale Display, Vintage Vehicles, The Pageant of Decorated Vehicles, Tractor Pulling, Terrier Racing, Children's Races and the Pets Parade.

The Grantown Show was the first time I had taken pictures at a livestock and agriculture show and it really was an eye opener, the diversity of subjects was very good and I hope that I have other opportunities like this come my way again.